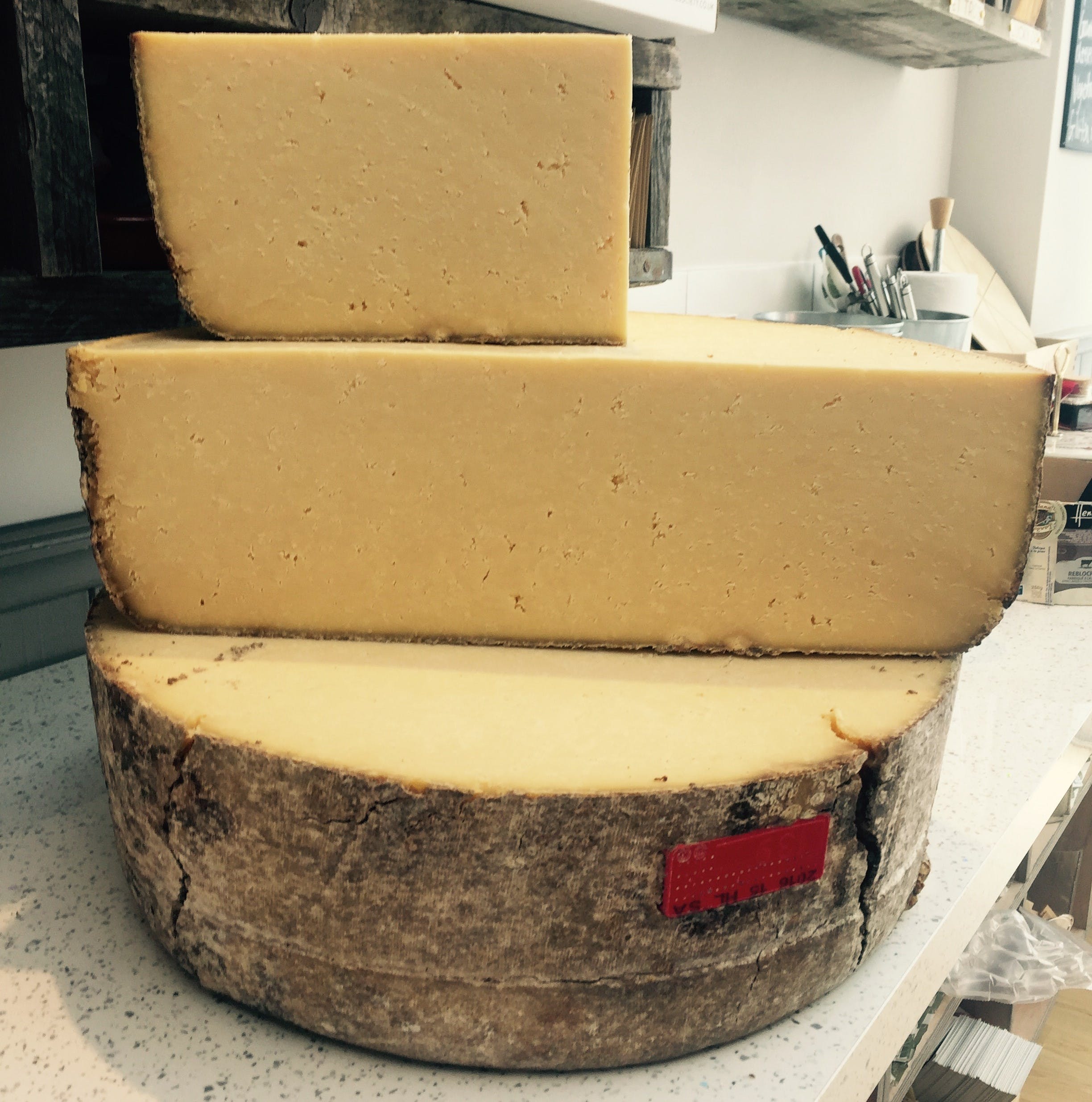 My introduction to Salers AOC

Many years ago we won a trade competition organised by the French Food & Wine Board (sadly no longer in operation, cutbacks are universally widespread) for the best cheese counter in the UK. The prize was an all in trip with a hire car to the Auvergne with organised visits to farms and dairies.  The Auvergne is a little-known area, next door neighbour to Limousin, in rural mid-France. Mountainous, volcanic, remote and wild, it is known for mining and working precious metals, and produces some great cheese to this day.

One such visit was to a very remote dairy that produced small batches of the little-known farmhouse Salers. Although with minimal command of each others language, it didn’t matter, we spoke the universal language of cheese which involves lots of arm waving, lip-smacking, eye-brow lifting and shoulder shrugging.

Le Grand Tour commenced with meeting the cows and inspecting the dairy, then finishing by descending into the maturing caves – cool, dark, ripening rooms where our senses were assailed by earthy, dusty, deep aromas of maturing clothbound cheeses sitting contentedly on wooden shelving on uneven flagstone floors; buckets of water and drenched hessian sacks strewn and draped around to keep the humidity high.  Scattered around the cave were various mouse traps to keep the local wildlife at bay, which seemed to be considered the norm – man and nature working in harmony?

Not something that your average UK environmental officer would view as hygiene friendly and definitely guaranteed to bring on a fit of the vapours! I do hasten to add that this visit was a good few years ago and times have changed – we purchase our delicious Salers from fully approved producers in France.

After tasting various age profiles, we came out of the farm to find that our smart NEW Renault would just not start.  This state of the art model of car technology, which had driven perfectly well beforehand would not wake up. Eventually, after much head scratching all round, Monsieur Farmer rang the nearest garage, about 50 miles away to get us much needed assistance.

The breakdown lorry duly arrived, loaded us up and proceeded to meander through the very pretty countryside for what seemed hours.  Have to say, you do get a great view of the area from the high cab of a car transporter. When we eventually arrived at the garage, the mechanics just rolled about laughing,  at times like that I was pleased that my grasp of the French language is poor. They simply clicked the key fob on and off a couple of times and hey presto, the car started – unbeknown to us, the car had a security locking system which kicks in if you don’t take the key out of the ignition…..we felt like real idiots.

The experience has not detracted from this cheese. Salers AOC- is a French classic, still little known outside France. I can’t understand why it has taken me so long to include it on our website – but when in stock you can see our Salers AOC with all our other French Cheeses.

The cheese was awarded AOC status in 1979 and is still made to the original, unchanged, ancient 2000-year-old recipe. It should be made from the unpasteurised milk from the curly coated, deep chestnut-coloured Salers cows. The cattle are allowed to freely graze on the high altitude, mineral-rich volcanic pastures that contains local native flora, a mixture of Genitian, Anenome, Myrtle and Liquorice that the cattle munch – this is what gives the cheese its unique, distinctive flavour.

Each cheese requires around 350-500 litres of summer milk to produce a mighty 35kg wheel which takes considerable strength to lift and move. They need to be turned regularly to ensure equal distribution of moisture throughout the body of the cheese.  The pressed cheese is cloth bound, regularly rubbed and rotated over a minimum period of three months,  it is then graded, and meets the strict rules of approval, it will finally be given AOC status and allowed to bear the small aluminium, rectangular red badge with the words CNAOF-SALERS stamped on the front along with the makers number. The finished cheese, which is generally at its best around 9-12 months of age, should have a thick crusty protective rind, golden yellow interior, and lingering floral bouquet with good acidity.